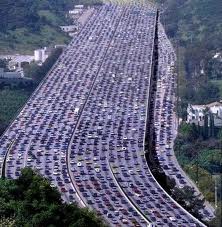 “This was never about the money, this was about us against the system. That system that kills the human spirit. We stand for something. We are here to show those guys that are inching their way on the freeways in their metal coffins that the human spirit is still alive”
– Patrick Swayze as “Bodhi” from the movie Point Break (1991)

So here we are.

This year, the average American father will spend three times as much time commuting to and from work…….. as he does playing with his children.

This year, the average American mother will spend seven times as much time shopping ….as she does playing with her children.