Ask yourself who benefits the most from high consumption based societies….and you will realize the enemy.

The whole world is in a box.

Just like the one you are staring into at the moment.

And you can take the box wherever you go!

If you choose, you can never not have the ability to look into the box.

I have taken about a 3 month “sabbatical” from blogging, because I feel like the box is taking over my life. My primal instincts are telling me something just isn’t “right” about all this.

Seems …..I am never not at work anymore.

And I am not a doctor.

So… what’s a little perpetual anxiety to put up with, when you can use the box and stay so connected socially with family and friends – you know – those people you REALLY want to talk to?

But wait……are you as “connected” as you think you are with those people?

In otherwords, are you REALLY communicating with them through the box? 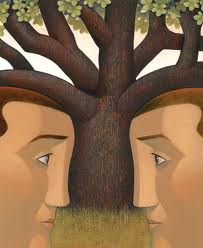 < Any behavioral psychologist or cultural anthropologist will tell you that at least 50% of effective human communication is “non-verbal”. Body language, facial expressions, eye movement, voice tone, voice pace, physical setting, context, even smell….comprise the other 50%. And what about the people, often loved ones, physically in your presence and yearning for eye contact....while you look into the box? Or maybe they, too, are looking into the box as they stand in front of you, and the whole sordid scene is one of group “perpetual preoccupation”? So at best, we are more than likely only “half-communicating” most of the time when using the box. Now, some would say half-communicating is better than none. But I say half-communicating is actually worse than not communicating at all, as it only leads to confusion, dis-information, and an overall "false sense" of effective communication. That’s just my opinion. But it seems by now we would have many of our larger problems as a species solved, or at least headed more swiftly in that direction, if I was wrong. Seems to me, we may even be going backwards overall on many large and critical issues facing Humanity. And besides, as a species, we did pretty well "communication wise" before the box.

Afterall, before the box….. we created algebra, built skyscrapers, and put some of our own species on the moon, all without the box. Not too shabby. And as kids, we simply told our moms before school in the morning, that we would be home for dinner at 6 pm, and then miraculously, we showed up on time!

Going Primal is not a movement promoting resistance to communication technology. On the contrary, it welcomes the value this radical new tool offers, such as powering positive social movements.

But like a judo move in cyber space, Going Primal will not hesitate to use the power and momentum of the box, in an attempt to put the box in its place.

Because right now, we are being consumed by the box. 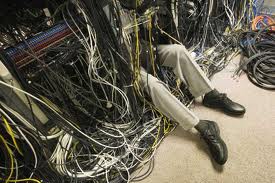 we were always the “operators” of the tool.

But now – the tool is “operating” us.

If you believe that to be an “alarmist” statement, then ditch all your cell phones, computers, BlackBerrys, i-Phones, i-Pads, GPS, and Droids, and see what happens.

Go ahead. I dare you.

Some people believe computers will someday take over the world.

Going Primal simply believes they already have – and we just live in it.