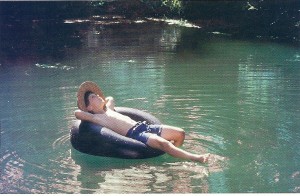 That is what many parents and teachers told children growing up in advanced societies prior to the 1990’s.

Although we were usually told this because we were supposed to be paying attention at a certain moment, the message was clear. Daydreaming is bad. An idle mind is a lazy mind. You need to be “productive”.

Advanced society reinforced this mantra at almost every level..and it stuck.

As a whole, we became conditioned. Ashamed to daydream.

And then came the “Information Age”.

Now, daydreaming seems to be on the verge of all-out extinction. Our “downtime” is packed with I-Pods and cell phones. Bombarded by Blackberries. Torpedoed by text messaging.

Even if we had the will to daydream now, we don’t have the time.

And for children today…. the ability to daydream may be moot. According to a 2010 “Kaiser Family Foundation” survey, children aged 8-18 today are spending 53 hours a week …on average….using electronic media. Do the math on that. And then wonder what it is doing to their formative brains.

Why is the looming extinction of daydreaming so tragic?

Because science is now telling us that daydreaming is actually a critical cognitive process, especially for creativity and problem solving.

What kind of society would we live in if daydreaming became extinct? Personally, I don’t want to find out.

So when your are done reading this, you may want to think about getting up and going outside for a leisurely walk – without an I-Pod. Try purposely letting your mind wander and drift. It’s all good.

Your primal mind is wired for it.

And never let anyone shame you away from daydreaming………..