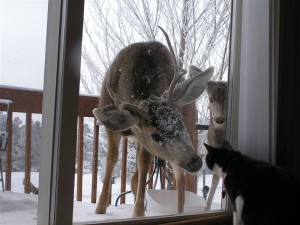 When your cat sits and purrs in your lap, or your dog licks your face and then lays down next to you…..it just feels “good”, doesn’t it?

There is a reason for that.

And it is because a primal re-connection is being made.

Afterall, for the first 99.99% of our species’ existence on Earth, we lived among all the other species in our local habitat, not separate from them. Yes, we feared some of them, some of them were pests, and some of them we hunted for sustenance, but that ancient symbiotic relationship wired our bodies and our minds.

And deep emotional ties associated with that “wiring”….. are still with us.

Despite that thick sliding glass door you see in the picture above.

Perhaps more profoundly, these deep emotional ties are extremely positive ones.  A multitude of recent scientific studies document that interaction with an animal, such as picking up and hugging a cat, triggers a significant release of endorphins, dopamine and other “feel good” neurochemicals  in the human body. This interaction  also significantly lowers the body’s level of the “stress hormone” cortisol,  as well as its  blood pressure.

In otherwords, you literally get a buzz.

Amazingly, these positive “drug like” experiences occur for humans even when they simply view wildlife from a considerable distance, let alone when their domesticated dog snuggles up to them. Ultimately, it is why many humans are willing to pay prodigious amounts of money to go “whale spotting”,  or are totally thrilled to see a fox run across their backyard.

And that is why “Rewilding” is so beautiful.

Specifically, “Rewilding”  is an worldwide conservation effort to restore and protect existing wilderness areas, and promote the management and existence of more wildife habitat throughout the planet.

The actual impetus for this movement comes from most wildlife biologists and paleontologists, who are now convinced we are in the midst of the Earth’s 6th mass extinction period.  This one brought on not by abrupt and abnormal volcanic activity, or meteorite impacts…..but by our day to day negative impacts upon the Earth’s ecosystem essentially since the dawn of modern agriculture.

We are now at a critical point in our relationship with wildlife, with the reality being that all of Earth’s species…. are in this together.

There never was supposed to be a “separation”.

Our pets are telling us so.

“Return of the Wild”- NPR Radio